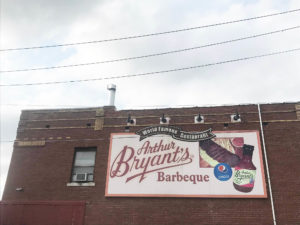 Arthur Bryant’s is a traditional Kansas City BBQ joint known for their vinegar-based sauces and open-face burnt end sandwich. One of Kansas City’s longer running BBQ spots, a version of the restaurant has been feeding the metro since 1908.

The restaurant began in 1946, when Arthur Bryant himself took over his brother’s BBQ restaurant. In its early days, Municipal Stadium was just four blocks away. Home to the Kansas City Athletics and the Kansas City Chiefs, the stadium provided excellent business.

By the time the stadium closed, Arthur Bryant’s reputation was strong enough to keep the doors open. They were known (and continue to be known) for their burnt ends and their open-face burnt end sandwiches.

Many notable people have stopped by to get their BBQ fix, including:

Arthur Bryant’s is definitely focused on food over frills. While Q39 and Char Bar create a welcoming atmosphere from start to finish, Arthur Bryant’s is more like Kansas City Joe’s – get in, eat your BBQ and get out.

They’re known for their sauce (Original and Rich & Spicy), their open-face burnt end sandwich and ribs.

Surprisingly, when we stopped in on a Tuesday night, the place wasn’t too busy. There were just a few people in line to order and a few sitting down.

We split the open-face burnt end sandwich with fries and coleslaw. Everything was okay, the only thing that really stole the show for us was the sauce. In all honesty, I think maybe Tuesday was a bad day to go. Assuming the weekends are their busiest, everything is probably not the freshest early in the week. 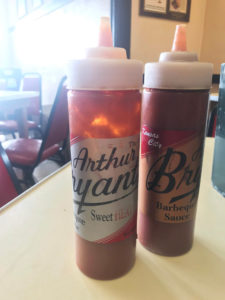 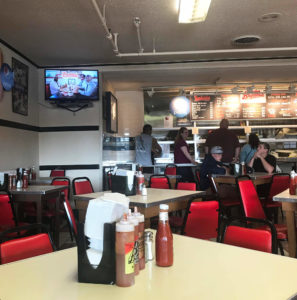