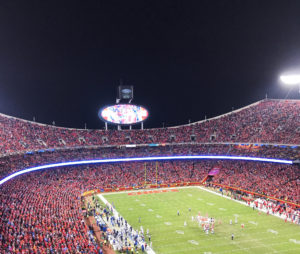 Cost: $$$
Atmosphere: Rowdy, loud.
Good for: Experiencing some of the best tailgating in the country.
Tip: Order parking passes online. It will save you $25.

Unlike other stadiums located within city limits, the Chiefs’ Arrowhead Stadium is about 15 minutes outside of Downtown Kansas City. It’s right next to the Royals’ Kauffman Stadium. As soon as the gates are opened, five hours before game time, you’ll find the parking lots filled for tailgating. Even in the cold winter months of football season, everyone is out tailgating. It’s such an energized fun atmosphere, even if it’s 20 degrees. 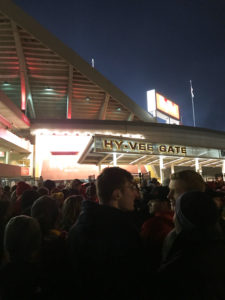 Arrowhead Stadium is located in the Truman Sports Complex, adjacent to the Kansas City Royals’ Stadium. The open-air stadium was finalized in time for the 1972 season. Throughout the history of the stadium, there have always been plans to add a roof or dome covering for the stadium, though it has always been deemed unnecessary.

The stadium is beloved by fans and players alike. It is also known as the loudest stadium in the world, reaching 142.2 decibels in 2014. After lots of tailgating, there are always plenty of rowdy people at the game, especially if the Raiders are in town. 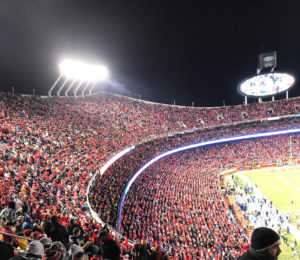 Kansas City Chiefs games are electric and entertaining for all who attend. xx, Libbie