Starlight Theater is a 7,598-seat outdoor amphitheater that produces Broadway shows and hosts concert artists. It is located near the Kansas City Zoo, about 15 minutes southeast of downtown Kansas City.

Starlight Theater opened in 1951, when there were nearly 40 self-producing outdoor theaters in operation across the United States. Today, only two of the 40 remain – Starlight and St. Louis’ MUNY.

Though Starlight wasn’t finalized until 1951, the first shows were performed in 1949 to celebrate Kansas City’s 100th birthday. In the early years, a few celebrities made cameo appearances in opening-night performances, including President Harry S. Truman. He performed in a rendition of Mr. President, but had to leave at intermission because he had appendicitis. Local entrepreneur and philanthropist, Ewing Kauffman, also performed at Starlight Theater in Damn Yankees in 1969.

In the 1970’s and 80’s, Starlight was on the brink of bankruptcy. The board launched a major campaign to save the theater, including a community gala, which continues today. By 1988, the fate of the theater had turned around.

Starlight went through major renovations in the mid-2000’s, which improved concessions, bathrooms and backstage areas. Today, Starlight Theater is very involved in education programs for children and young adults, in addition to producing and hosting Broadway shows and concert artists.

Throughout the 66 year history, many notable productions and performers have taken the stage at Starlight Theater, including:

I naively thought parking was free, but it’s $7 for lawn parking and $12 for the lot. When we pulled up, we were in a bit of a scramble because we didn’t have cash. They do accept cards, but don’t advertise it. We used the grass lot and it was fine. They are about as close as the paved lots and there were plenty of spots. We did go on a Tuesday night, so weekend performances may be busier. The gates open an hour before performances, so there’s time to look around, grab food and find your seats.

We got snacks from a concession stand, but there are lots of options if you need a full meal. There is a concession stand for about every type of cuisine, including burgers, BBQ, Italian, Mexican and American. There are also two buffet options, BBQ and upscale American, in air-conditioned areas of the complex.

Q and I saw Something Rotten, from the director of Aladdin and co-director of The Book of Mormon. The play tells the story of two brothers and their attempt write a hit play in the 1590s. They’re overshadowed by Shakespeare, but end up writing the first known musical. It was very funny and, frankly, much better than I anticipated. 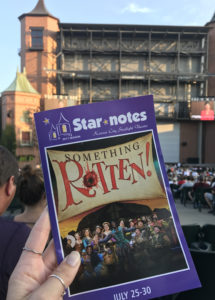 This season you can catch four more Broadway plays – The Bodyguard the Musical, Motown the Musical, Grease and Kinky Boots. Or, if you’re not into Broadway, see Alt-J, Idina Menzel or Matchbox Twenty. xx, Libbie.