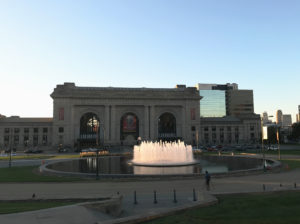 Cost: Free
Good for: Spending the day exploring different areas of the city
Tip: Use this Google Map for the main KC Fountains, or rent a KC BCycle and cruise around from fountain to fountain.

Kansas City is said to have the most working fountains in the world – more even, than Rome, Italy. In 1992, the city even added the “City of Fountains” to its official corporate seal. The City of Fountains Foundation has its own KC Fountain Tour, but I modified mine a little.

I love the fountains because there is just something so serene about them. They’re a place in the city to relax and reflect. They’re a happy place. In my KC Fountain Tour, I made it to 25 fountains over the course of a week, going to them randomly, as I felt. You could easily make a day of it, and try and find them all. 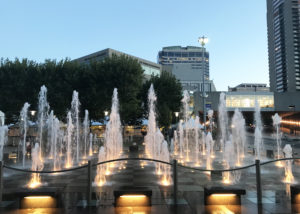 The History of the Fountains

The first Kansas City fountains served a practical purpose – hydrating the horses, birds and dogs of the city.

In 1889, Kansas City hired George Kessler to develop a master plan for our park and boulevard system. He designed two fountains – one at 15th and Paseo and the other at 9th and Paseo. Though the fountain at 15th street was destroyed in 1941, the fountain at 9th street, The Women’s Leadership Fountain, still exists. Kessler would go on to build many more fountains for the city. 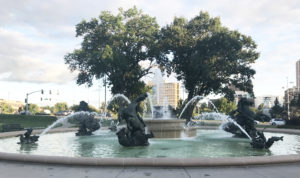 On a trip to Rome, local philanthropists, Harold and Peggy Rice, noticed that many of Rome’s fountains were in disrepair. They didn’t want the same to happen to Kansas City’s fountains, established The City of Fountains Foundation in 1973.

There are 200 official Kansas City Fountains. In my KC Fountain Tour, I made it to about 26, but they are just so magical. I chose to visit many of the publicly-owned fountains that were of the most interest to me (and close to activities I was already planning on doing). I broke my KC Fountain Tour into four areas:

I love to see people gathered around the J.C. Nichols Fountain, or children playing in the Crown Center Square Fountain. The Kansas City Fountains are such a specialty that people all over the city get to enjoy on a daily basis. Whether you visit one or 101, take five minutes to sit by a fountain and relax, reflect or rejoice. xx, Libbie.