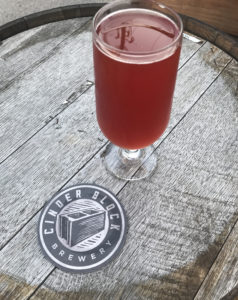 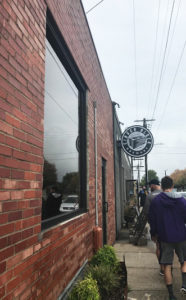 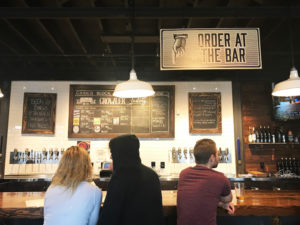 Cinder Block opened in 2013, though owner, Bryce Shaffter, had been home brewing for about five years previously.  Bryce, together with Bryan Buckingham and John Baikie, have been brewing ever since.

Cinder Block is in North Kansas City, 10 minutes north of the City Market. I had never been to the area, but it seems to have a lot to offer. Nearby, there was another brewery, a distillery, a few restaurants and Screenland Armour theatre.

Cinder Block uses traditional brewing methods, but also have a Barrel Program for their sour beers. There are barrels around the brewery where they age standard beer with different wild yeast strains. The wild yeast allows the brilliance of sour beer to shine through after 6–24 months. 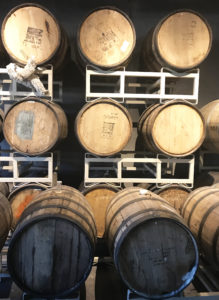 Our Experience at Cinder Block Brewery

I stopped in the taproom with a group of friends after visiting Chicken N Pickle on a rainy Sunday afternoon. It was pretty quiet, but plenty of people were flowing in and out. I noticed a lot of bicyclists stopping in on their rides, so I’m sure the bartenders are used to larger groups.

I had the English Cherry Cider and it was delicious. Not a lot of cherry, not too sweet and a hint of cinnamon. Honestly, it’s probably one of the best ciders I’ve ever had. It tasted just like fall. I also had a sip of Q’s Northtown Native (a pale ale), which was pretty good too, but I’ll be sticking with my cider when we go back. 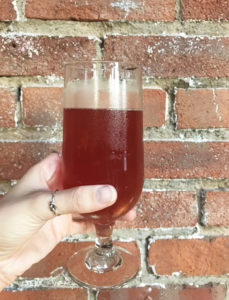 If you’re hungry, there’s a food truck in the beer garden and $1 pretzel and cracker snacks behind the bar.  Highly recommend the snacks if you’re not hungry enough for a meal from the food truck.

Overall, Cinder Block is a great addition to the Kansas City brewery scene. It has a relevant location, nice staff and good beers. What more could you want? Xx, Libbie. 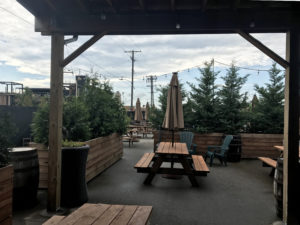