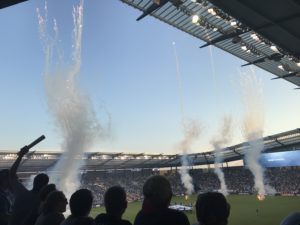 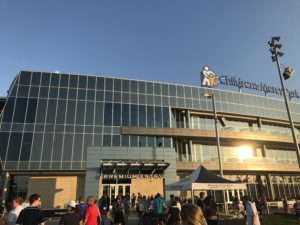 The 2017 season marks Sporting KC’s 22nd year in Major League Soccer. Kansas City was introduced as one of 10 charter members of MLS in 1995. Four months later, the league unveiled the nicknames, logos and uniform designs for the franchises, including the Kansas City Wizards, an identity that would last until 2011. 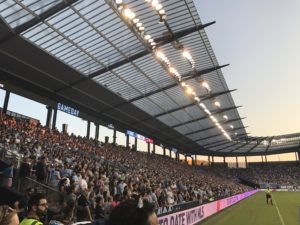 After the sale of the franchise, The Kansas City “Wiz” became Sporting Kansas City. The inaugural match at the new stadium, Children’s Mercy Park, was played in 2011. The stadium has continued to sell out for 100 consecutive MLS matches. After experiencing the stadium and the fans, it’s easy to see how the past 100 games have sold out. 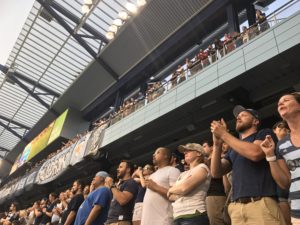 Wow. I’m not sure what I was expecting, but it wasn’t this. As someone who is not super into soccer, I was pretty amazed. People were so into the game! A coworker of mine recommend we sit the “The Cauldron.” This is where a lot of the ticket holders and die-hard fans sit, and It. Was. CRAZY. There were constant cheers and everyone knew them. It was so fun and completely unlike any sporting event I’ve experienced, including the Chiefs and the Royals. 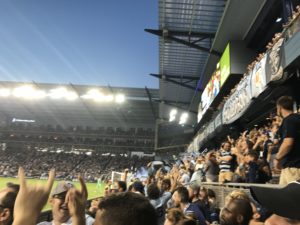 Apparently this was a pretty important game in the series, so fans were even more amped. People we sat by were friendly and nice enough to explain things to us and teach us some of the chants.

The Cauldron is at the end of the field by the goal. The seats were fun, but if you want to see the whole field better, I’d recommend different seats. The Cauldron is also probably not a place for kids – it gets pretty rowdy.

But, if in doubt, definitely sit in the Cauldron. xx, Libbie 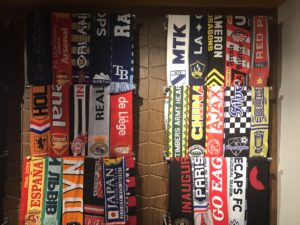